This book contains 34 poems, written, performed, recorded and published on 34 days in August and September 2020, as the UK tried to find its way out of lockdown

Picture the scene – you’re in the UK and you’ve seen the country ravaged by a pandemic that’s affected the world, but that oddly seems to have affected the UK more than most. The country has been in some form of lockdown for five months or so and the talk in the media is turning to beginning the process of unlocking and returning to what may be left of ‘normal’.
Running alongside that, we have, lucky as we are, the process of Brexit trundling along, deadlines coming and going and the few faint hopes of there being a sense of control somewhere, however minor, appear to be receding further and further from view. Any sense of trust in those we have foolishly elected to lead us seems to have disappeared without a trace. They’re just making this shit up as they go along, and lying without fear of repercussion on a daily basis. Which is nice.
So we’re in the process of being told what is now safe to do, by people who we didn’t trust in the first place, who are lying on a daily basis without an inkling of concern or shame, we have the highest death rates in the world and we’re expecting that worse is still to come.
So what do you do? My answer is now familiar – I start writing – and this very tome is the latest output of that process. In a similar fashion to the Literary Lockdown poems that accompanied our descent into the madness of a national lockdown, this collection contains 34 individual poems, written, performed, recorded and published on 34 individual days in August and September 2020, spread across around 40 days in total.
I’ve given up pretending that I can always see the funny side in what’s going on around me. I know it’s there, and there are things that do make me laugh, but the anger that pours out of me at times is just overwhelming. That means that you might have to look pretty hard to find what I consider to be the funny side of some of the enclosed works, and you might have to be really prepared to work hard yourself at finding it funny too
55 pages – A5 – Paperback

There are no reviews yet. 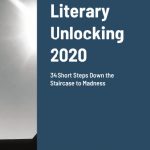